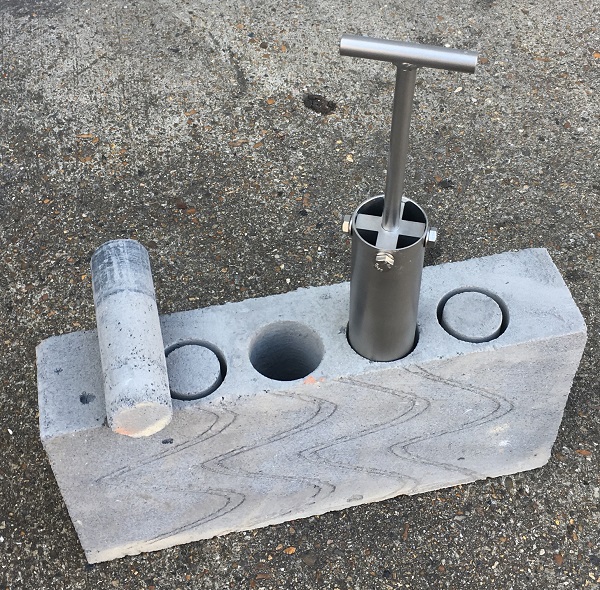 We were commissioned to manufacture a batch of 12 stainless steel core catchers for use by the national oceanography center on their Isis ROV. We were approached with the design concept and shown how it should work on the ROV but the big problem was that trials could only be done when doing the actual job at depth. There were some guesses as to what the material would be at the location but until the dive was done no one was really sure, for the initial prototype and our trials we were given a cinder block as it was the closest material that resembled what they had hoped to find.

The Isis ROV is a lot bigger than it looks in the picture standing at over 8 feet tall it is packed with some very expensive and cool gadgets, inc HD and special cameras, special lighting to a titanium robotic arm!

We needed to make a working proto type that had to be tested and approved by the client before the final batch of 12 were produced.
The cores were to be core drilled with a diamond core drill bit that would be driven by an underwater air driven motor held in one of the manipulator arms, but the issue was then retrieving the core sample after drilling as it was from deep sediment rock. The idea was to slip the core catcher over the core after drilling, then gently pull and wiggle it with the robotic arm manipulator, it would brake off whilst the teeth would dig in allowing it to be retained in the tube whilst it was removed from the rock bed.
We were given a cinder block as it was thought to be the closest material to the real stuff. 4 holes were cored so we could have a play.

We went through three design variations on the gripper before we got it working to how we thought it should work. We then presented it to the client for their own trials in their workshop with the ROV manipulator.

The top T handles were T shaped as it is best for the robotic arm manipulator to grip onto and use, these were made so they could be unscrewed afterwards and removed so that the core could be slid out. The teeth dug into the core sample so it couldn’t fall our and the teeth were so good it was impossible to slide them the other way.
This was all machined, waterjet cut and welded in 316 grade stainless steel

Safire Associates is a small family owned and run engineering business. Manufacturing to high standards anything from a small and simple machined part or fabricated bracket to a full design and build, utilizing our skills with Machining, Waterjet Cutting, Welding and Fabrication as well Design work in 2d and 3d cad.

We work in most materials and do a good job.

Hours
Monday—Friday: 9:00AM–5:00PM
Saturday: 9:00AM–3:00PM
if your making a special trip please contact us by email or phone  to make sure someone  will be here.

Small quick jobs, one offs, big batches of parts, full design and build projects. If you want something done well, contact Safire for your Engineering projects